Our school is a modern school with a contemporary teaching program and teachers who are perfecting continuously. During our history, we have undergone dramatic transformations.

The name of the school has been changed several times. The first school building had the name ‘The School in the sixth neighborhood’, in 1926 the name was changed to ‘Crown Prince Petar’, then to ‘Svetozar Miletić’, and finally in 1965, by merging with ‘Brotherhood’ (‘Bratstvo’) primary school, it was registered by the name ‘Ivo Lola Ribar’ primary school. Its current name, ‘Széchenyi István’, dates back to 2001.

Széchenyi István Primary School comprises 4 school buildings: 1 central building in Karađorđe road and 3 area buildings – in Šabačka street, in Edvard Kardelj street and in Veljko Vlahović street, in Kelebija. The central school building is 2 kilometers away from the center of Subotica, on the road towards the border settlement of Kelebija. The closest area building is in Šabačka street about one kilometer away from it.

The central school building houses specialized classrooms for Serbian, Hungarian and foreign languages, Art, Craft, Biology, Chemistry, History, Geography, Music and a modern IT classroom. The central building, as well as the area buildings, all have ADSL internet connection for students and employees at their disposal.

We have the central library and the media center as well, which are at our students’ disposal at any time. The school library is equipped with books by classical and contemporary writers for children, popular science books, encyclopedias, lexicons, dictionaries, and professional pedagogical and psychological literature. The holdings resources are continuously updated.

We have organized extended stay at school for lower school students as well. Socially challenged students are provided with free snacks. The central school building houses 5 offices for school administration, rooms for support staff, a workshop, a boiler room. During the Winter period, we have secured gas heating.

Within our school building, there is a modern dentist’s office as well.

There are a big sport schoolyard with a court and a big gym.

A separate building - the school in Šabačka street, the so-called ‘Šabačka school’

In the building in Šabačka street, we have 7 general classrooms at our disposal, 1 IT classroom with 10 computers, a copier and other IT equipment and appliances necessary for contemporary teaching. The extended stay classroom has desks, a rest mat, cupboards for keeping supplies for Art, books, didactic games, toys, a TV. The students have a kitchenette and a big schoolyard at their disposal. During the Winter period, the building is heated through the city gas heating system.

A separate building – the school building on the road to Kelebija, the so-called ‘Salai school’

‘Salai school’ is situated 3 kilometers away from the central building. There are 3 general classrooms, a 36 square-meter room for Physical Education, a teachers’ room with an internet-connected PC, a room for a pre-school class and a big schoolyard with a playground for children. During the Winter period, the building is gas heated.

The school building in Kelebija is 11 kilometers away from the main building. In it, there are 3 general classrooms, 1 IT classroom with 5 PCs with an internet connection, a room for a pre-school children class, a teachers’ room, a mini-library, a 12 square-meter kitchenette, a dining room and an extensive schoolyard with a basketball and a futsal court and a playground. During the Winter period, the building is gas heated. 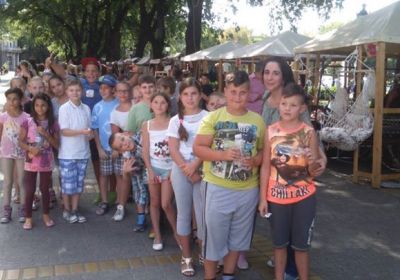 Our Students' Performances at the City Day Ceremony 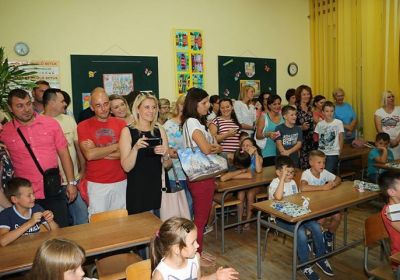 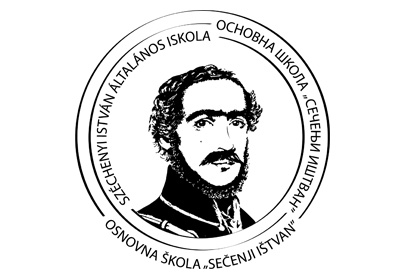 Presentation by a Karate Club at Kelebija School 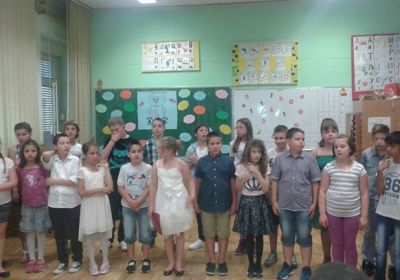